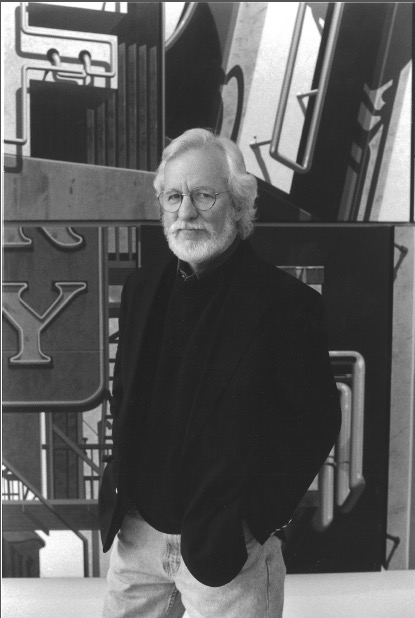 Robert Cottingham is from the first generation of photorealists with Chuck Close, Richard Estes and John DeAndrea, who were also exhibited from 1970 at O.K. Harris Gallery, New York.

Cottingham was born in Brooklyn, New York, in 1935. He saw the beginning of consumption society and advertisement, national and individual markers of American society. The young Cottingham’s visits to Times Square with his father got him into the habit of looking up to see the colourful and increasingly bright signs. In 1947, when he was twelve and televisions were beginning to enter American homes, Cottingham had his first artistic revelation seeing Edward Hopper at the Whitney Museum of American Art (New York). This discovery would be decisive both in his career as a painter and for his artistic orientations.
Fascinated by lettering and typography, Robert Cottingham started working as art director in a New York advertising agency.

Transferred to Los Angeles, the radical change of atmosphere on the West Coast, with the huge, incessant neon lights of Hollywood, make a deep impression on Cottingham; he started painting every day after work. He used photographs initially as a reference point, taking his own amateur pictures in the city or cutting them from newspapers and magazines. Cottingham the painter of urban landscapes is already painting neon signs, facades and fronts in the colourful, structured and precise style he still has today.

In 1968, when Robert Cottingham was concentrating on drawing and painting villas in Hollywood, his work was shown in his first solo exhibitions and he subsequently decided to put an end to his advertising career in order to fully focus on his art.
In 1974-75, Robert Cottingham was awarded a grant by the National Endowment for the Arts which financed a long bus tour through 26 towns in the north-eastern United States, trip during which he took large quantities of photographs from all angles and at all times of day. This trip, amongst others, was a way of renewing his stock of images of places forgotten by modernisation

At the turn of the 1980-90’s, Robert Cottingham started taking an interest in another vernacular symbol of American modernity : trains and railroad landscapes, which he rendered in a more restrained palette of colours than his neon signs, but with a new attention to texture. It is the typography of the railway company logos that particularly fascinated the artist – will follow wheels, doors, ladders, bolts and chains of the trains themselves.

In the early 2000s still painting luminous signs from the 1930s and 1940s, the painter became interested in old typewriters and cameras, parts from industrial machines and then perfume bottles.

To this day, Cottingham’s work continues to be placed in the Photorealist sphere. His work has been exhibited all over the world and is part of major public collections such as Guggenheim, MoMA, Whitney Museum, Tate, Metropolitan Museum.