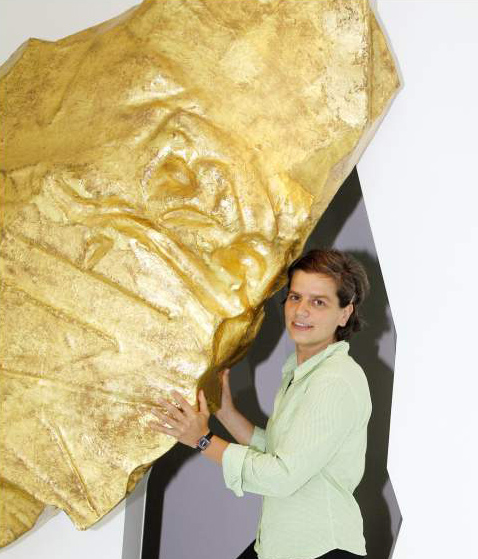 The visitor finds right at the entrance of the gallery your Scénarios Fantômes (« Ghost Scenarios »), these assemblages of photographs accompany and punctuate all your exhibitions since 2007. What’s ghostly about them?

The Ghost Scenarios are small photographs, 6 by 9 centimetres, assembled one to another and one in relation with another, in twos, threes or fours, thus defining a scenario, a “ghost” scenario as there is no written story.
It allows me to tell stories without writing them, just with images.
Actually, the Ghost Scenarios stimulate the other projects, give indications and paths to understand them. At first, I took pictures to record materials, forms, and I didn’t always develop them. The first one I ever took was of a huge police revolving light which later became a Ghost Scenario. All these photos taken during wanderings without being destined for anything in particular, are all sorted in a big folder that I often use as a data base. These photographs are like “sleepers” who can potentially awake or be activated at any given moment.

The exhibition simultaneously presents a “living-dead” tree presented rue des Cascades in the 20th arrondissement in Paris during the last Nuit Blanche, five rocks in conversation, two masks which were worn by children during a performance, and a big peacock tail fanned in a complete circle. How would you define the world in which your works develop?

Although my older works evoked a science-fiction world, for this exhibition, I reached for a nature that I wanted to be as strange as possible. I knew that the tree (L’Objet du doute) could create a surprise effect, would make people jump, and would even scare them a little. However, I had not imagined the potential comic effect of the dialogue between the rocks. In 1999, when I took a plane to Paris, I was given a small magazine in which I spotted a speaker embedded in a fake rock. One could say that the project started there and then. For the installation Au milieu du Crétacé, I gathered four fake rocks and a fake log: five characters in conversation. Their discussion comes from something real, scientific; one of the characters only speaks in onomatopoeia (Brazilian to be precise), with jungle noises as an interlude; the effect is close to an animated cartoon. This project was also thought as a performing show, with actors, characters, a dialogue, a décor…

You are indeed getting closer and closer to the world of performance, both in your works which sometimes constitute a décor for a stage, and in the people performing, often children or animals whom we also watch in your videos.

Everything I experience daily – reading newspapers, watching films, taking the plane – everything can be subject for incorporation in my work after a kind of mutation or transformation. It’s about taking things out of their context so that they are slightly off balance and then somewhat modifying them. Identifying the potential for the extraordinary, trying to have an effect on reality by magic.
I am easily fascinated, amazed and, with time, I observe with more and more sharpness what I could capture. It’s a daily life practice: when things seem to me strange enough, I know they will come back as “ghosts”. What interests me is to modify reality to make it wonderful and unreachable, whilst being myself also unreachable; I constantly look to be surprised!