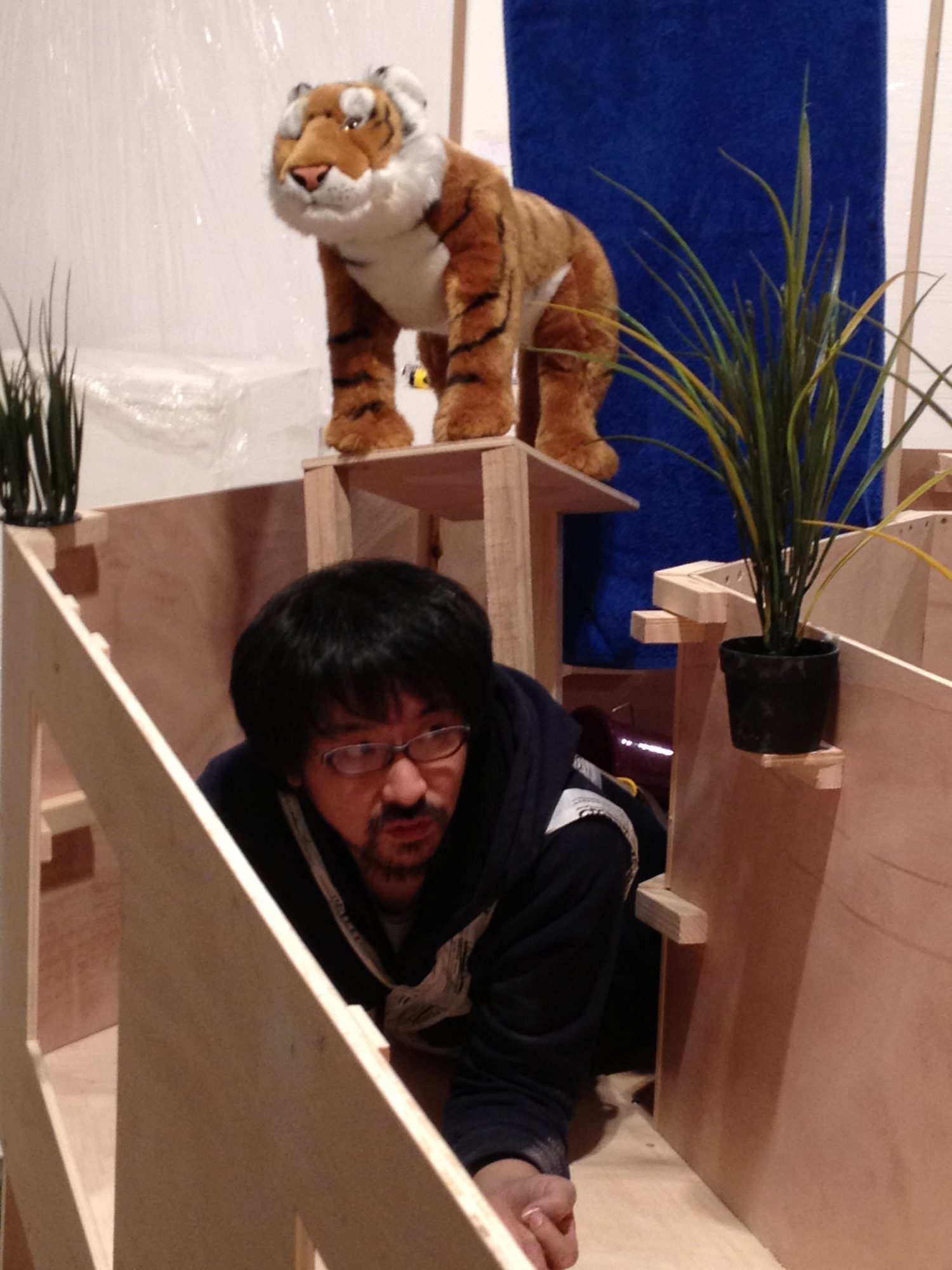 Paloma Blanchet-Hidalgo / Slash magazine: In your work, the combination of technology, and the human body perceived as an ensemble of several systems, draws on new sensory spaces.

Taro Izumi: Let’s look at “Telescope” for instance. Without ever looking at the canvas, I paint a picture through spaces created by bodies. Forms are drawn randomly, helped by a video camera. And every time, it makes me feel like I’m touching the object. I use my body as a medium, similar to pigments or wood, and that I can control from afar. To me, it’s the concreteness of the work that gives it its strength, without having to linger on the concept.

In what way, in your opinion, does video reach “the internal organs of the world”?

Video is almost like a zombie: combined with my installations, it allows us to visualise a kinetic energy and to observe both a state of things and a process. It replays the same actions over and over again as to immortalise them, contrary to painting which is more like a corpse. When you make visible simultaneous actions, it triggers a bizarre effect. In other videos, I tend to render the real more abstract. It’s the case for “White Bear” in which a stone is thrown into the water and splashes a drawing, revealing a progressive erasing, a dilution of the pen stroke.

Your staging, such as “The Cultivation of a Shoes Bottom”, are both playful and absurd. What is your imaginary behind the figure of the player? To what extent does it hide a social criticism?

Again what matters here in the game is not its end, but the experience and process. It’s the same in my work. The game rules highlight a tension between freedom and constraints. Concepts and laws, as precise as they may be, don’t prevent us from experimenting, from possibilities and wonder to exist, and from different interpretations to be found. This questioning around freedom of representation echoes a social experience: it works as a metaphor for my thirst for independence which is constantly confronted to the Japanese social norms.

The idea for “Brave Yawn” came to me before the earthquake. But it subsequently changed my perception of the installation and this modification is interesting to me. After the recent events in Japan, people have had to face doubts that were previously inconceivable, official reports being often far from reality. It became important for me to analyse the situation under different viewpoints. If the earthquake did indeed influence my work, my aim is not to make it a national symbol, like manga or the nuclear bomb. I find it ridiculous that earthquakes and nuclear plants are used in identity strategies.

What about your next project?

I’m starting a residency in Scotland in May. Then in the Fall, I will participate in a group exhibition at the Mori Art Museum, and at the Aichi Prefectural Museum of Art in Nagoya. I’m also planning other exhibitions in Japan.