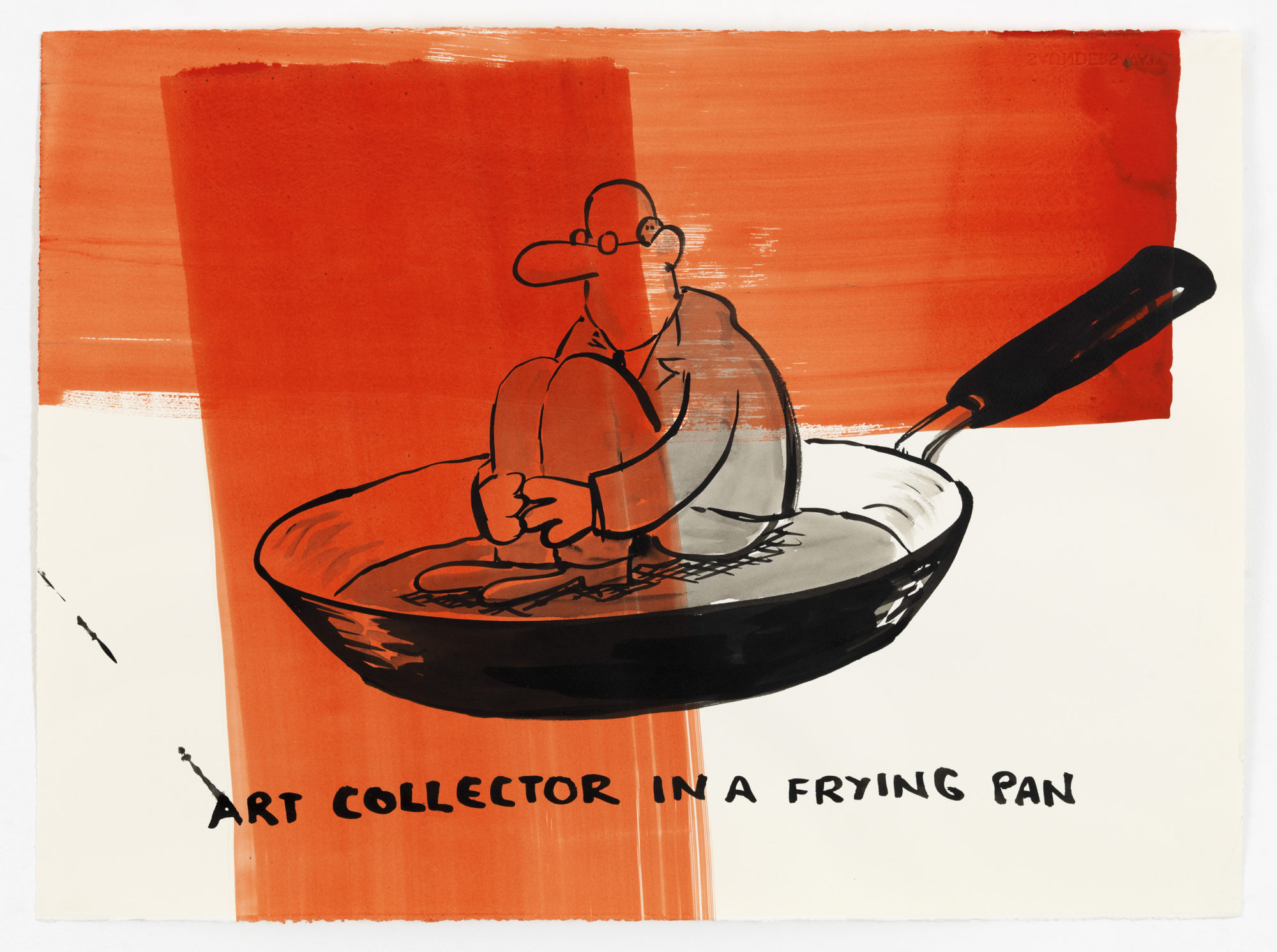 Is this the first time you have used a mechanism like the « Gag Master » in your work?

I’ve used the Gag Master in workshops and I’ve used it to make cartoons. It’s a tool that was invented by an anonymous person or group in the early 20th century as a mechanical tool that allowed a cartoonist to dial several ten thousand different premises for cartoons. Because it is mechanised you usually get a standardized type of joke. The title for this project is one of the random premises I got. It could have been ‘ An office worker on the moon losing his dignity’ or ‘Steven J Hawkins in the sauna exaggerating greatly’ or ‘Your shrink in hell being jealous ‘,‘ The pope in bed being curious’, ‘A gallerist at the doctors office, frugal’, ‘A banker on television unable to make up his mind’, ‘A tourist at a wedding acting ignorant’, ‘An exhibitionist in a gallery the order of things reversed’, ‘A baby at a funeral unable to accept customs’, ‘A salesman in Holland forgetful’, ‘ Carla Bruni in a submarine using animals and humans for unfit tasks’, ‘A cucumber on the Eiffel tower displaying extremes in etiquette’. But I liked the first one the best, ‘A junkie in the forest: doing things the hard way’. You can imagine a lot of funny ways, in which a junkie in a forest could make things hard for himself.

In the exhibition, the framed “Gag Master” can no longer be moved, are you showing the viewer a new way of thinking that could be applied outside of the show?

The « Gag Master » consists of three concentric wheels. The outer wheel contains standard characters, the next standard situations. And these two are usually quite stereotypical. With the outer wheel you have the salesman, the maid, the boss and the secretary, etc., and then with the locations, similar clichés. The central wheel is the interesting one because it consists of twenty-five relationships or situations, like, the order of things reversed, a commonplace articles used for unusual tasks etc. They are basically twenty-five types of comedic situations. They are very close to Freud’s list of joke mechanisms, but they come from experience, so they overlap and are not very systematic. To me this is the interesting thing about the tool, but it does have a tendency to generate predictable, unremarkable humour. I have tried to use it as a cartoonist, for fun, and I found that I’m better without. I’ve used it in courses or in workshops, when it was about questions of collaboration because it is a form of mechanised “cadavre exquis”.

One of the main mechanisms to come up with something comical is recombination, that’s what this is. You have all these different examples and you just go through them until something is funny. Usually the things that are funny are those you wouldn’t have thought up on your own. I think that artists use this too in the studio with their materials. There is a lot of concept, attitude and intention in art, especially these days. But when you come u with something it’s still very often just people sticking things together in a way that surprises and pleases them, a way that is better than what they could have premeditated..
On another note, the Gag Master is of course never pure random, In a way it is a type of self-portrait. It lists items form a huge reservoir of popular knowledge, items that I prioritize..

There are two different kinds of drawings produced by the “gag master”, one is very cartoonist and the other few are “photorealistic” Is there a particular explanation behind this?

They are two different groups of works which come out of the same process.
There’s a system that can generate certain kinds of work, the tools I have at my disposal are the things I can do. I thought it was important not to just generate cartoonist drawings. I think that in the end a lot of these drawings become works that can stand alone, that talk about questions of paintings and making images that are engaging. They are drawings that question a certain kind of painting that is both historically important and happening right now. For the specific series of more photo-based drawings I think it made sense because they were the ones that dealt with celebrities. I feel like we all share these kinds of images, a fan postcard of Susan Sarandon is just as present in our collective consciousness as a cartoon of an American tourist.

Are you using primary colours and different textures in your drawings as a reference to different painting movements?

I think they bring up a very basic notion of abstraction. If you think about early 20th Century geometric abstraction, they used primary colours. It plays with that, it’s important because on some level the elements that are more narrative, figurative or even textural are also treated like abstract elements. If you put these aspects together take for instance, a shrink and a place, then if they become elements of an image why not also add expressive colour? The way the colour is applied is also quite mechanical. I basically put the piles of paper together on the floor and made fairly mechanical marks with a very big brush, using the layers. Some marks look willfull and other marks are what goes over the edge. The accidents and drips. And they’re treated just the same. So, it makes you wonder whether it is an artist making an expressive mark or paint being applied without any real consideration. Is it genius or industry? And in a way, I don’t think there’s a big difference. A lot of the things you could dial on the « Gag Master » would not be funny. Even if they are technically correct jokes, and a lot of the marks that I make as a painter are not well painted but they’re still paint on paper so they’re Painting.

What is the next thing you are going to use the “Gag Master” for?

I took the « Gag Master » to China a week ago and the people I worked with came up with the idea of using it to dial 30.000 different sexual positions. I don’t know. That could be interesting.