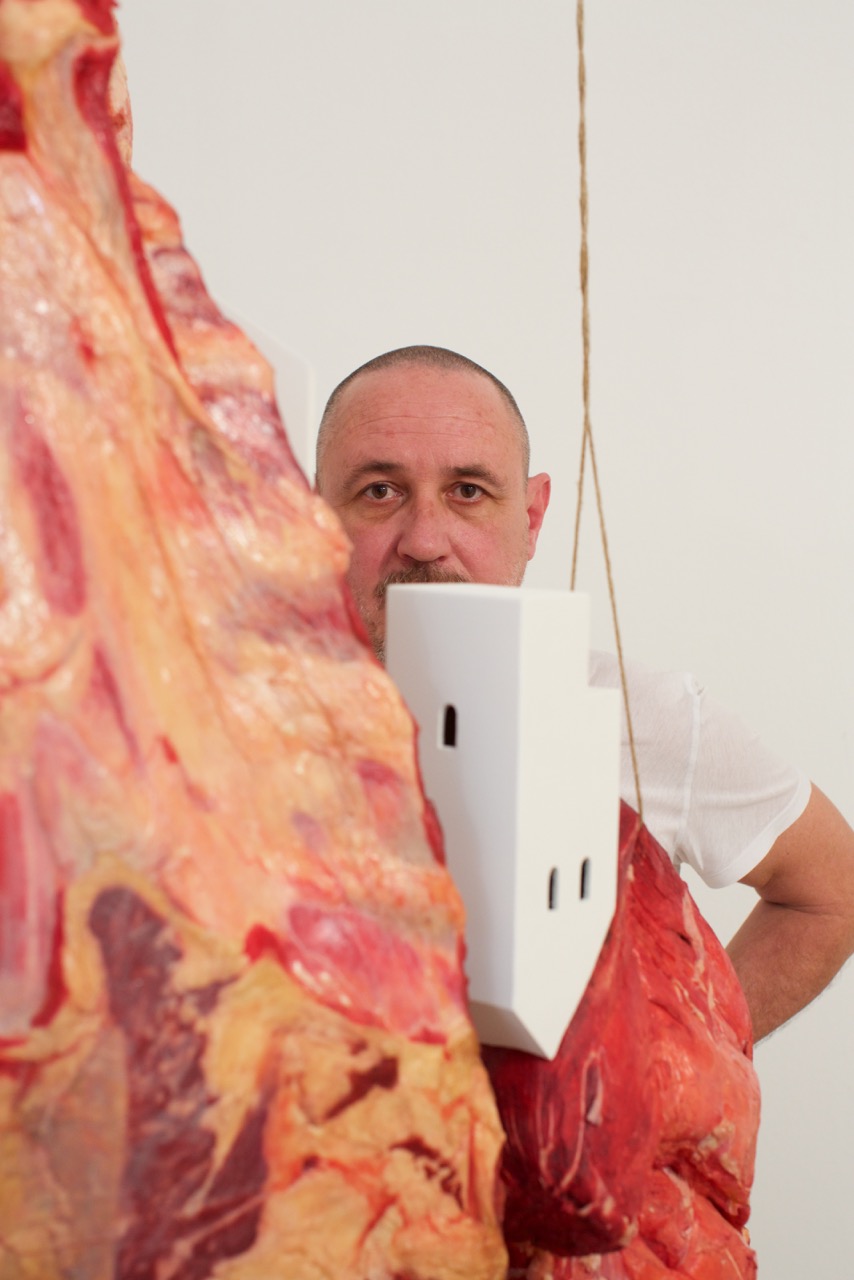 Nature, food, the encyclopaedia, language, architecture… Which lively element underlies the works in the exhibition ?

Time! This notion so delicate to deal with and so far removed from the object, but which affects and subdues all things, like a super medium. However, the sedimentary time of a rock is not the same as the time frame of a new born, and in reality, certain temporalities never meet. I wanted to gather together these very different time frames to suggest the fragility of building on precarious bases or sand. I was always attracted to notions of withdrawal, slowness, and at the same time by excess and gesticulation. However here, I was dreaming of a total absence of movement. With the Still People, the hyper-realistic structure of the work brings an illusion of life, but a completely immobile life, in a state of stasis. What happens when the body stops moving entirely? It enters a time frame that is not his own and meets new processes: the time of decomposition, of plants growing, of the long-lasting memory. It meets the course of this memory which has to bury itself down in order to be preserved, like a fossil. It echoes the fact that the Encyclopaedia Universalis – the edition of which does not exist anymore and which I use in my Still memories – is doomed to be forgotten. In these sculptures, however, it is the slow time of the growth of plants that randomly opens the pages again and activates the memory.

We can hardly guess that this man covered with plants (the Still Man) is moulded at your image. Is this a different representation of yourself to the ones we are familiar with, the “clones” and “pawns” ?

I came back to the word “pawn” to name these figures, a word from which the works originated. My entire artistic adventure emanates from this funny game I developed right after I finished art school, a game where I am a pawn and where everything is allowed. This game has huge ramifications and still feeds into my work. I even re-activated it for the Centre Pompidou in an installation called The Game of Life. This new version, which I consider as a 3D software, opens up a possibility to create as many versions of an object as its postulate allows. It implies thinking about the artwork not as a unique object, but as the visible version of all its possible versions. It is a serious game in which I attempt to replace the conceptual “or” by an additional “and”. Still Man is just another version of this pawn flesh.

Can we talk of a performative aspect in your work ?

I have no relation to performance such as it is practiced in art, I am far too shy for this! The performance I see at work in my creations is more related to the “Guiness” sense of the word: copying for years pages of the same dictionary, being stuck in a painful position for hours in my workshop to create my pawns, committing to long series with strict rules. It is almost a sports expression of art. But I like this idea of never stopping and always working in order to offer a plastic construction that is restless. It is a way of consuming myself. The Table du Festin (Feast table) takes on this idea. Abundance, bustling, excess: not one line, not one pattern to stop the gaze. In a sense, the Table du Festin is a space of expense where resting is forbidden. Maybe that is my idea of a performance! I’ve always wanted to build on this base, hence the strange little houses balanced on what is doomed to disappear.

Many elements in this exhibition refer to ideas already in gestation in 1992, even before your first exhibition at the gallery. What is your view on this trajectory of yours ?

We sometimes make gestures the consistence and depth of which we do not always recognise early on, but they stay with us our entire life. I understand some of them better today. I endorse them again and in-between 1992 and today, there is all that I learned, abandoned, all the life elements which free some perspectives. But what amuses me is that back then I had a life but I was starting another one. Today, I have two lives that are almost on an equal pane: one on the Coast of the Mediterranean, and the other on a Pacific tropical island. These two landscapes have a huge influence also contradictory on me: whereas one pushes me towards reason, the other throws me into excess. This contradiction is violent, but it also remains always fertile.