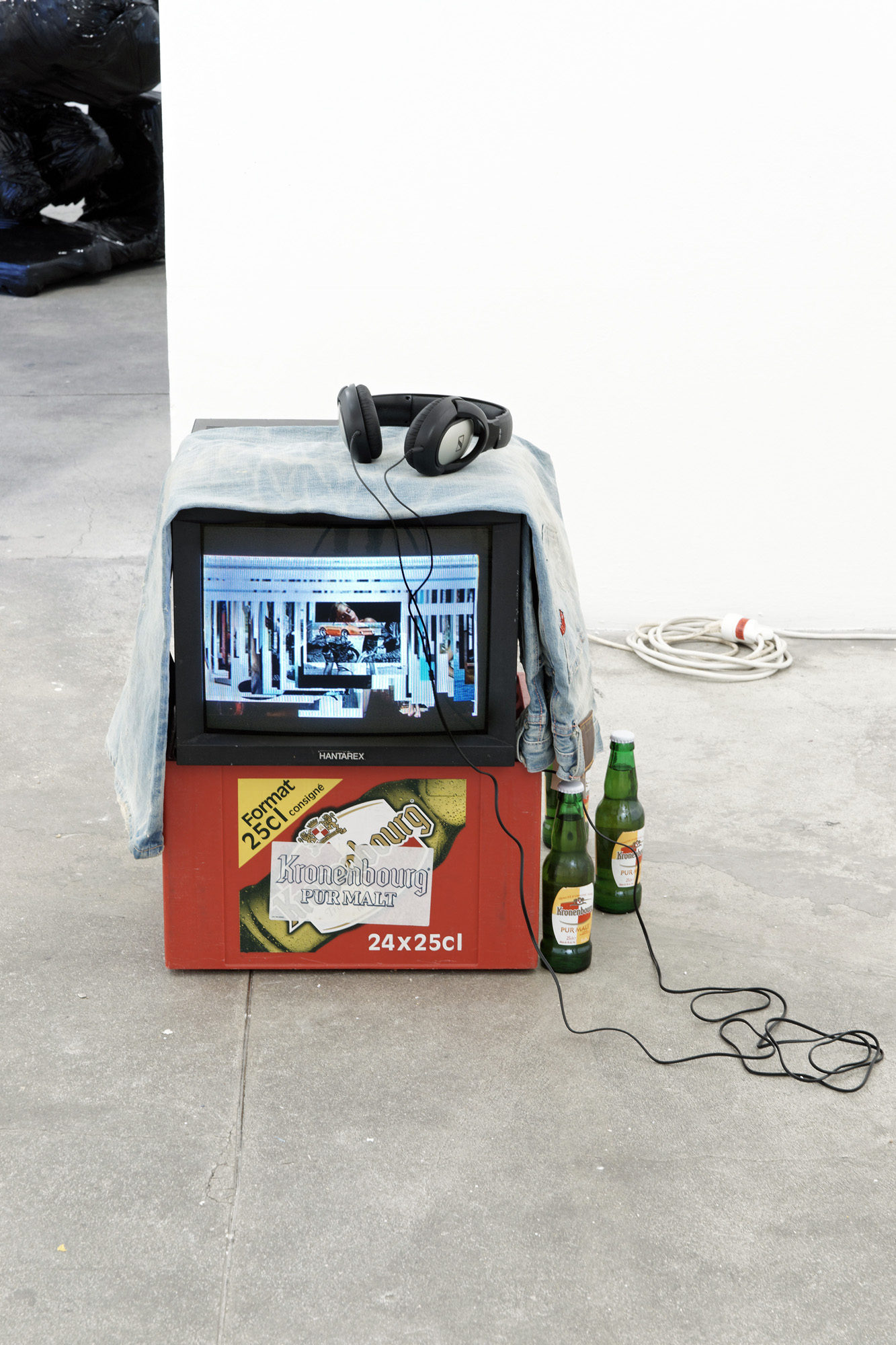 Why the french title « L’homme qui voulait savoir » for your show in the Project Room of the gallery ?

‘L’Homme qui voulait savoir’ is the name of a film, and the poster for that film is hung in the show. Originally I wanted to call the show ‘The Vanishing’, which is the title of the film in English. I often try to disappear from my works, as I am quite interested in disappearance as an artist, in terms of not leaving any trace of the artist’s hand. It was ironic then that I could not even title the show as I intended as the translation of the film title was not literal, it was not simply “la disparition”, so even The Vanishing had disappeared! But “L’Homme qui voulait savoir” works well too as the show is about me trying to figure things out; trying to work out my relationship with the internet, technology, style, appearance…

It seems that appropriation is important in your work, in the way that you have appropriated the title of the film, but also in the elements you have used in your installation: the images from blogs in your video, the photographs of furniture and the furniture itself…

The question of appropriation is interesting to me as I think a large part of contemporary appropriation today is just consumption, “shopping” really. It is a process I can enjoy but I have a real ambivalence towards that enjoyment and feel uneasy about the process in general.
There is a strange relationship between producing and “finding” that is deciding on something then searching for it and obtaining it. “Finding” becomes part of an appropriation dialogue and appropriation becomes an artistic motif. After Duchamp, Richard Prince, Haim Steinbach and others, it feels like, in a lot of ways these artists have already done everything you can do with appropriation. But as I have an uneasy relationship with production, with leaving the trace of my hand, appropriation as a way of working still remains really interesting for me. It relates to disappearing but the process is still personal and feels like quite an honest creative gesture: trying to find the right thing, looking for details, spotting slippages… that is what I chase and then I try to present or represent these moments.

Are there any rules, mediums or techniques that you use to “chase” for your work ?

A lot of it I guess is based on opportunity. For example, the documentary sculpture- pictures of piles of furniture that I took when I was trying to find things to make the sculpture with- is about trying to find the potential in an object; the potential to kind of fit together with other objects and at the same time to be an example of itself as a type of thing. The sculpture I have put together is almost an amplification or a cleaner version of what I saw in the flea markets. The photographs you see on the computer screen document the initial process, the chase… but then also become part of the sculpture itself.

You often play with the potential of something to become something else, in the Project Room you took advantage of the different potentials of architecture…

The relationship between inside and outside is very important for me, there is something interesting about making what is personal public and vice versa. The divider in the space is actually three stage flats, which are used as masking devices in theatre to create a division between on and off stage. In my installation I wanted to do something similar so in the first space you may have the impression of being inside the gallery space but when you find yourself on the other side of the divider you are no longer sure if you are inside or outside… The idea of inside/ outside, real/ not real, original/ fake are all very important in the show. The “African” fabric used in the smaller space was chosen, in part because of its interesting history: originally it was a Dutch copy of Indonesian batik silk, so it was essentially fake, but its bright colours and cheap price made it popular in West Africa. What is funny today is that China now manufactures fake versions of the Dutch fabric, making it a fake of a fake.

Talking seems important, in one video in the show you talk in French about your relationship with the internet, is this a way to finally be in your show as the artist?

The recording is a monologue I wrote about my relationship with the internet. It is something quite personal, or perhaps even confessional, but in order for it to be understood in the show I had to get it translated, then I asked an actor to read it for me, mimicking my own accent, so hopefully there is some confusion about who is reading it and why it is being read, as opposed to simply spoken. I like to provide as many hints as possible to give ways into my work, which the recording hopefully does and yet at the same time, I want to remain distant and disappear as an artist. Doing a show in France, where I can’t speak the language, was interesting as I often use my ‘natural voice’, the conversational voice, as a device within my practice but obviously I can’t do that here, so it was an interesting opportunity to try and push that in a way that I had not tried before, by using a script and an actor. This seemed to fit really naturally within my interest in disappearance, trying to not be there and always pointing towards something else, whilst trying to hide the hand that is doing the pointing. With the It’s not the future… monologue piece I ended up making a work which I personally don’t even understand, where I can’t make any fully informed judgement on my own text but, perhaps in the end, that manages to articulate something about the distance between outside and inside, about the impossibility of being able to truly see yourself.