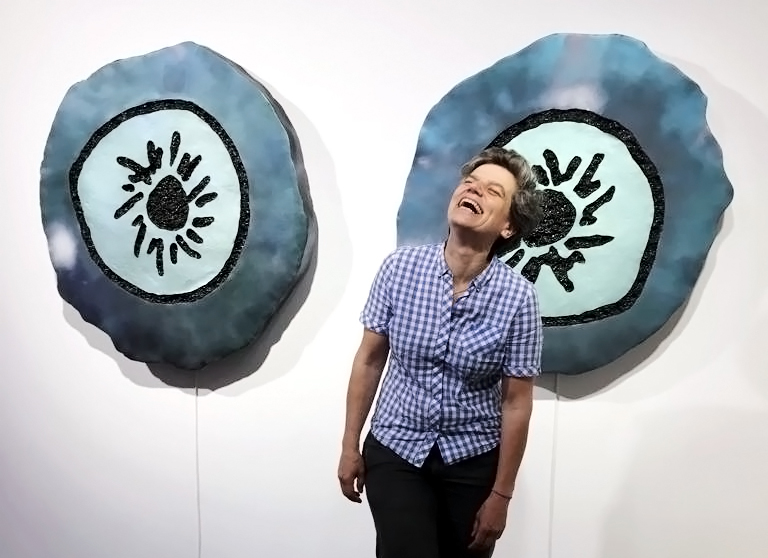 For your fifth exhibition at Galerie Georges Philippe & Nathalie Vallois, you’ve been interested in the sense of sight. What is your own approach of this sense?

For most of us, sight is essential. Vision is attention. This is why the presented pieces for “They will be able to see the obstacles and to circumvent them” require a special presence from the visitor.

The whole exhibition is about our adjustment capacities. What we see is not the same for everyone even though the objects we are looking at are similar.

The works move and also imply the movement of the visitors. He is not a simple viewer anymore but an actor of these scenes taking place every day.

Where do these eyes – welcoming the visitors at the entrance – come from?

These revolving eyes follow another work made for a previous exhibition at the gallery in 2009 entitled “The Thousandth Mosquito”: a giant tarantula larger than life having eyes in spirals rotating indefinitely. The idea was comprising two possibilities: the first one was to be scared, the other one was to be hypnotized by the animal. Two different states. The whole exhibition was about getting closer to the feeling of fear and suspense. Here and now the suspense is still going on, and these two eyes are fixing the visitors at the entrance before they continue on their way. What happens after that, requires a special attention. These eyes are a friendly warning of what is coming next.

The turtle’s legs that are in the exhibition come from another bigger project entitled “The Savannah (The Veldt)”. Can you describe this project?

The Veldt is the title of a play written and staged by Ray Bradbury himself in the 70s. In a family house, an ordinary family – two parents and two children – discover a new game room. This room, made by high-level engineers and psychiatrists, offers the kids the possibility to imagine everything. This is how Peter and Wendy, respectively 12 and 13 years old, create a savannah inhabited by strange and scary creatures.

This is a text I discovered by chance and that has been following me very often in my work. The play reconciles theatre and science-fiction and contains numerous staging notes that have inspired my works and my own staging at La Ferme du Buisson and at the Théâtre des Amandiers in Nanterre in 2018.

More recently, I’ve been willing to create artworks from this play and freely adapt it. Slowly, the idea took different forms for exhibitions and shows. In both exhibitions at the Centre d’art La Criée in Rennes “Alors que j’écoutais moi aussi…” I was announcing what I was about to do. First by a poster put into motion by light and then by the arrival of the parents, symbolized by the turtle’s legs. They are two of the five characters of the play. Lydia, the mother and Georges, the father, are each one represented by a big turtle leg, losing its claws at some point. Then we have to put them back, thus take care of them…

You always talk about your sculptures as characters. Why?

The idea that my sculptures are characters of a strange theatre comes from a conversation I had with author and director Philippe Quesne, for the Disgression publication. I think that my work aims to animate and tell stories. It is a long scenario happening in front of us.

During the whole exhibition, we can see boards regularly falling down. This is a very rare movement in a gallery space. What did you want to provoke with this act?

I’m looking for movement. I remember seeing several boards falling in real life. It is a very beautiful movement. A tall plywood board overbalancing, escaping the human vigilance and slowly lying on the floor. This is what I was merely looking for. The two boards presented in the exhibition are the two first works of an entire series. I am currently working on a bigger one, which should be, real life-sized, like the panels you can find on the market. The two boards falling are also playing a role. They can surprise or not.

There is also a suspended beam rotating on the ceiling entitled “Les colonies atteindront Paris en 2025” (The colonies will reach Paris in 2025). What is the hidden meaning of this piece?

« The colonies… » is a sculpture I created with a series of collages. Beams crossing the galaxy. They are arriving. The big iridescent beam, looking like beetle shells, gathers two of my readings, completely unrelated.
The first one is an article that was announcing the arrival of colonies of caterpillars in Paris and the second one, Akira Kurosawa’s Memoirs, in which the author tells the story about a relative who was always hiding under a beam when the storm was rumbling. The game consists of taking shelter under this rotating beam, making circles in the gallery space. All of this is quite absurd. The beam causes a kind of paradoxical movement. The visitor could learn about this story during a conversation and play the game.

You work with varied medias, from sculpture to video, through painting, inspired by theatre techniques. What is the influence of theatre in your work?

The influence of theatre and performing arts in general is part of a whole. I don’t have any special relation to theatre, except being an eager spectator of shows and exhibitions myself. My thoughts come from a larger ensemble. There is no privileged domain. My curiosity leads me. Things happen and take me by surprise.

For the first time in 15 years, you are showing a large drawing, or more exactly, a lithograph: how did you have this idea?

The MAC VAL offered me the opportunity to make an artbook for children. This drawing is part of the series I made for this publication. I wanted to tell the story of The Veldt. I illustrated the story with color drawings. Drawings are generally quite rare in my exhibitions but are always hidden, somewhere in my work, before the shows. For this project, I had to work on this, more precisely. Bradbury wrote this story in the 70s, and I imagined psychedelic drawings, as before, when color has a very important role. Because of their technique and destination, the original drawings are very small so I turned them into lithographs, a new experience and technique, very surprising.

Your works and inspirations could make us thing of cinema movie sets. Where does this affection for special effects and fantasy come from?

Actually, there are several directions that are interesting to me and that can be very open. Science-fiction is part of it but a very small part of a larger ensemble that sometimes goes back in the past, like archeology for instance. Science-fiction has a rich imagery but this is not what interests me. It is more its freedom of thoughts and inventions that intrigues me.

In this exhibition, we also find some Scénarios Fantômes (Ghost scenarios) – a series of pictures you assemble together. What are they?

The Scénarios Fantômes are very useful in my work. They’re like a training I am practicing every day. They focus my attention on the context and reality. They are a constant research. When they appear in an exhibition, they contribute to a bigger scenario.

What is the importance of the public in your work?

The spectator activates my work. He makes it earning extra lives. Like in video games. Extra-lives or extra-life, I don’t know.