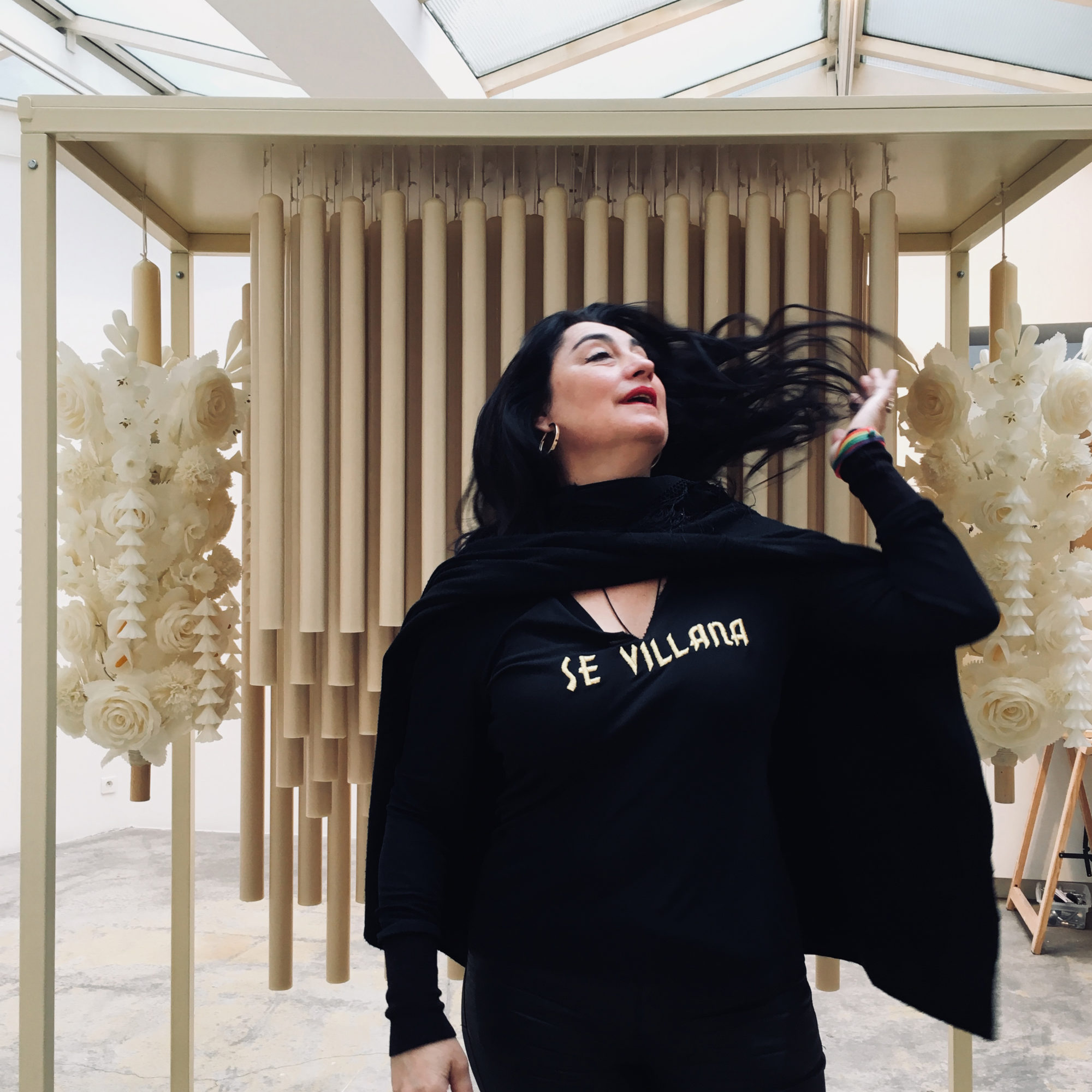 During the Tabacalera exhibition in Madrid in 2018, you gathered an ensemble of works that the public was waiting for. For this new exhibition at the gallery, you have created a whole series of new works very different from what we used to know. Is this a new step in your work?

The exhibition at the Tabacalera was a retrospective that reflected my work over the past few years. It was an endorsement of my entire career.

These new works created for the exhibition at the gallery are much more connected to the beginning of my career. I didn’t have much time to do it and I took a real risk for this exhibition, but it opened up a whole new path for me. I have the feeling to start a new stage, it is true.

For me it was a real inner exercise. The element of fire, central to the exhibition, is also the representation of my inner fire. It is the symbol par excellence of transformation. It is the end and the beginning. The whole exhibition rests on these oppositions : white/black, positive/negative, and since the fire incorporates this duality, I decided to work with this element.

Let’s start with this triptych of portraits which bears the name of the exhibition “No apagues mi fuego. Déjame arder” for which you really caught fire in a cinema studio in Madrid…

This portrait of me is of a burning artist but also of a burning woman. Burning, blazing even I would say. We can see several interpretations depending on what we associate the fire with. Since fire is an element that invites you to think about the good and the bad… What is clear is that it is an element that helps you to make the transition to another state. And it’s also a way for me to evoke art as a transformative element. It’s a way of talking about the artist’s role and his personal involvement in what he does. It’s important to me because art is, in my opinion, inseparable from life.

Other possible readings are suggested in particular by the traditional dress that I wear, the mantilla, since I naturally continue to work with a few pictures of my own culture. It is associated with mourning and rigor as opposed to the white robe, which is the symbol of the Assumption. In my work, the use of certain subjects related to the culture of my country continues to be important.

Fire is also the fire of love, the creation one …

It is about a potential fire: on the one hand there are works where fire appears, burning, and on the other hand I play with the notion of fire which illuminates. Because fire represents the good and the bad. One single image represents the two options. “Don’t put out my fire” refers to all types of fire because for me art can only be engaged, passionate and fiery: Art is an element of renewal. Art is also the Holy Spirit, it is the langague of fire that sheds light on knowledge and passion. These are many different readings that I wish to present for this new exhibition. The idea of fire as both personal and universal interpretations.
There is a very famous quote from Antonin Artaud saying “Life means burning up with questions”. For me, this is a beautiful metaphor for the role of the artist and the symbolism used by the Catholic Church. “Let me burn” is to have curiosity because without it, life no longer has much meaning. Finally, the more burning questions there are, the more questions you ask yourself.

The large installation with candles also shows the power of desire and faith, that of belief. In the end, a candle is above all for all of us the possibility of a wish fulfilled.

The works are also inspired by a whole religious tradition, you immediately think of witches, pyres … Aren’t you a witch?

Yes, no doubt, a part of me is! (laughs) This is the power of transformation! For embroidery, for example, these works are inspired by seals and symbols used in magic. In modern usage, and more particularly in the context of Chaos magic, these drawings refer to a symbolic representation of a wish of the magician. For these pieces, I have brought together two symbolic elements: the cross and the seal. The cross is also understood as a seal, but what interests me in the cross is its point of intersection. The seals are therefore in the center, where the deities are normally represented, and contain something more personal. I gather in the same composition the divine and the banal. What interested me in this association of symbols was being able to reflect on how humans use drawing in the context of magic and how religions have appropriated this aspect of drawing.

And all these nails, all these diverted symbols you are talking about, remain nevertheless very anchored in the Spanish tradition, isn’t it?

This is a part of me that I cannot take away from my works of course!
Beyond my Spanish origin, I represent many people, women – Spanish – but not only.

It is true that many things are seen through the prism of tradition and the Catholic religion here in Andalusia. If you look at my series of photographs of candles held by the hands of women with painted nails, they obviously refer to Andalusian culture.

Traditionally, during the procession, two aisles of candles, carried by the penitents, are organized in an ascending order always towards the virgin and from the virgin towards the sky. One of the cries that the foremen give when they go up the steps is: “In heaven with her”.

Penitents are seen as suffering souls: the holy company of Galicia and other cultures. In my works, candles are held by female hands, with long varnished nails, worn today by young girls, and each nail wears a mask of a primitive culture. It is a way of working on the Catholic in front of religions from other cultures.

In this large central sculpture, you use the same candles, in a composition where this time, they are unlit…

Yes, they are suspended and unlit. But they can be lighted at any time. It is a large decor full of symbolism, pending. It is a meditative work which takes up all the elements of these processions but where the main image (the Virgin) remains absent.