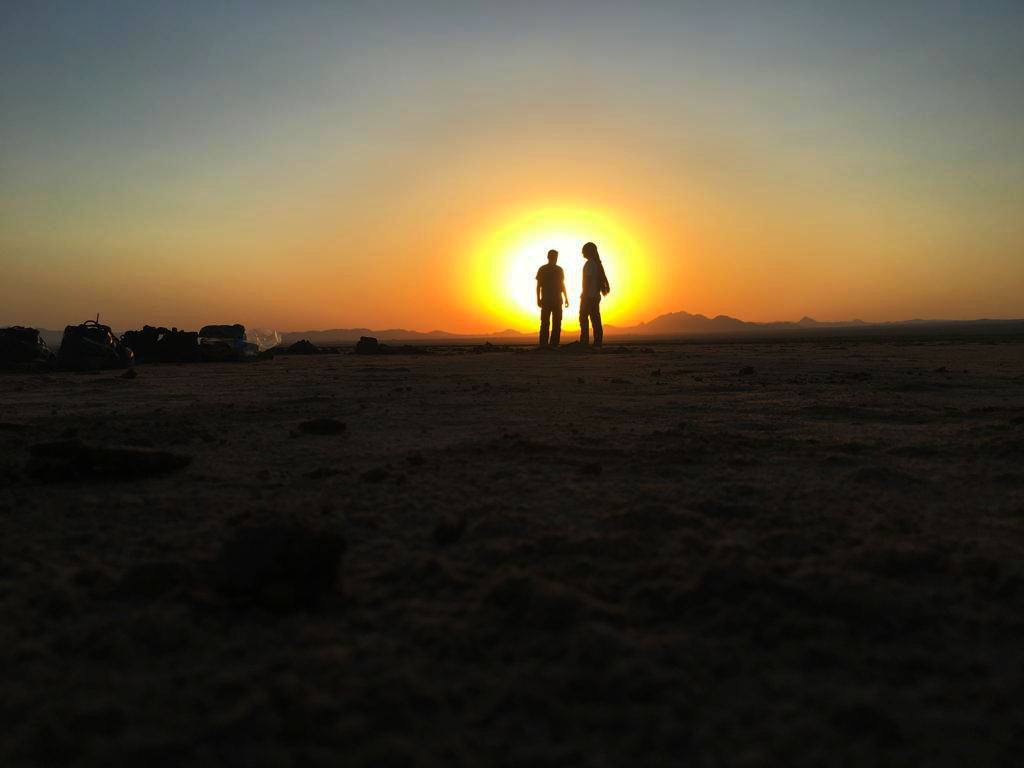 Peybak is first and foremost a duo, but it is impossible to tell who has drawn what. This makes me think of Renaissance workshops… How would you define your collaboration?

Actually, we wanted to have some more people working with us, have a workshop. The real start is when we were in high school together and had a band. I was the singer and Peyman was the bassist!

Each work since the beginning is executed with “four hands”, on big paintings each participation is totally balanced, for the recent sculpted frames and the canes we even collaborate with traditional craftsmen, which is something we value.

On the opposite, for the shows, I am always travelling alone. I have some family in France and I speak English. At first, it was hard to come alone but now I like the adrenaline and the dynamic of the openings. I love to speak and exchange with visitors, I take it now as a real “role”. I call Peyman all the time and ask him his advice for everything, I was on the phone with him just now!

In your work there is always a storyline, do you have a guideline, do you feel like storytellers?

At first, we don’t think about what we want to paint. We do the gesso, the texture, then we add the colour and we finally discover eyes and shapes. We follow what comes to us and for the story it is the same. We never really know what will come next, everything happens to us and unfolds in front of us as we work.

When we were doing animation we once reversed the sound of one of our videos and heard “Abrakan”: we loved the sound and the word, we then found out the meaning of it: it is a non-existing word but Abr means clouds and Abrakan means a lot of small clouds. When we made our first painting, the shapes were less defined, it was more abstract and colourful. Initially we didn’t have any story, gradually the works gave us the story.

For this show, Abra-Chah, The Well of Abrakan, Peyman and I were walking nearby the studio in the desert, south of Teheran. I knew there were loads of wells, although they are now dry. It used to be a very beautiful place but nobody lives there anymore. We carried on some research and realised that my grandfather made some of those wells. We immediately thought we could use this as material for our work, and we started to imagine the life around these wells.

In one of the videos presented in the show, visitors can, for a short moment, have the feeling of our surrounding, the magnificent landscape of the desert. In this film, one character comes to some elders who invite him into the well and then viewers walk through with him…

It seems that your world comes straight from familiar mythology, is that true?

Some of the characters are similar. First, we paint them and then we realise they look like some animals from Iranian myths. At the beginning of the video as in some pages of the small notebook, you can see a representation of the bird of dryness. In the legend, when this bird opens its wings, the rain doesn’t fall and it makes everything dry. This character is almost the only one referring to a known myth. All of our works in the show are not really telling a story but they give our “mood” of Abrakan.

The creatures on the knob of the canes are also part of the same world and they add an additional dimension to the works. My uncle calls the canes “Zahuk”: as long as you have the canes you have the power to meet the creatures, to find the way. It’s like a magical thing, it brightens the path.

More than stories, our work is closer to an imaginary encyclopaedia of different characters and animals, and very few of them come from Iranian myths.

On the occasion of your first show you already told us that you won’t make any projects to live elsewhere than Iran, do you still feel the same?

Travelling is not as easy as it is here. It can be frustrating but you get used to it. For us, the world is not made to travel. In Iran, people are crying in airports because it’s so difficult to come and go that you know that if you leave it’s for a long time. When I arrived in Paris, there were no tears at the airport.