Born in 1931 in Strasbourg (France) / Died in 2019 in Cork (Ireland)
Had worked in Strasbourg, New York, Canada, Ireland 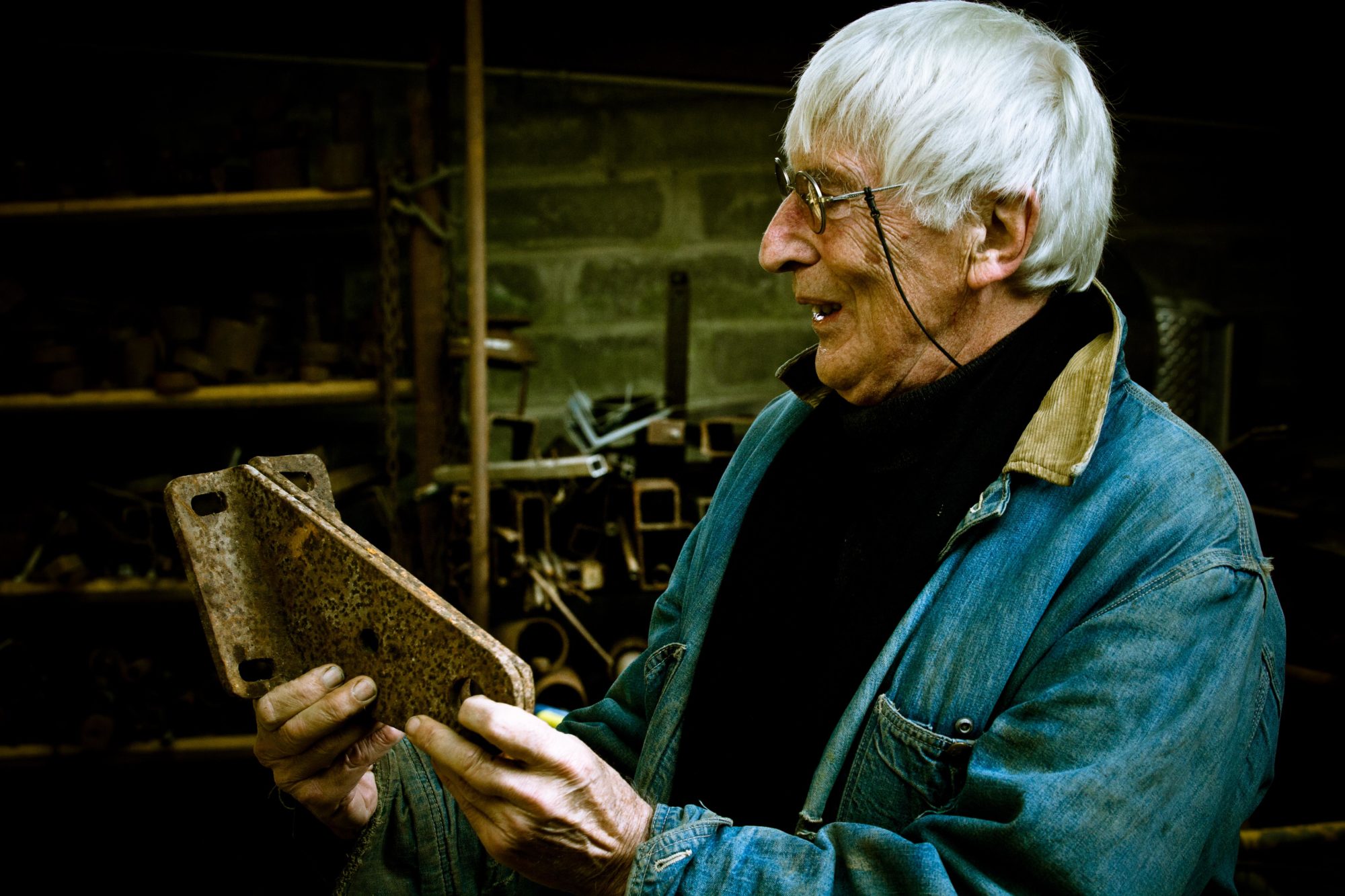 1931
Jean-Thomas Ungerer, aka Tomi, is born in Strasbourg, the son of Alice and artist, historian, engineer and astronomical clock manufacturer Theodore.

1935
After the death of her husband, Madame Ungerer and her four children move to Logelbach, near Colmar.

1939-1948
In 1940, Alsace is annexed by the Germans, and Tomi undergoes Nazi indoctrination at his school in Colmar where French is forbidden then reinstated in schools in 1945. Speaking Alsation is banned at school. The War years will mark deeply his whole life and work.

1950-51
After failing the second part of the Baccalauréat exam (in a school report, his headmaster describes him as a “willfully perverse and subversive individualist”), Tomi decides to hitchhike to the North Cape. In Lapland, he crosses the Russian lines.

1952-53
He joins the Méharistes (French Camel Corps) in Algeria, but is discharged after falling seriously ill. In October 1953 he goes to the Municipal School for Decorative Arts in Strasbourg. Tomi is kindly asked to leave after one year.

1954-55
Increasingly interested in the US, he starts visiting the American Cultural Centre and befriends American Fulbright students. He travels widely across Europe (to Iceland, Norway, Yugoslavia and Greece), hitchhiking and working on cargo vessels. Between trips Tomi earns a living as a window dresser and advertising artist for local businesses.

1956
Tomi sets out for New York with 60 dollars in his pocket and what he later describes as a “trunk full of drawings and manuscripts”.

1957
He meets the children’s book editor Ursula Nordstrom at Harper and Row who publishes his first children’s book The Mellops go Flying. It is an immediate, award winning success.
He does his first advertising campaign for Burroughs machines but also collaborates with numerous magazines such as Esquire, Life, Holiday, Harper’s, Sport’s Illustrated and The New York Times.

1958 – 62
Tomi completes the Mellops series and publishes many other books for children, including Crictor, Adelaide, Emil, The Three Robbers and Rufus, which win numerous prizes, as well as satirical books like Horrible and The Underground Sketchbook. He begins a long-term collaboration with Daniel Keel of Zurich-based publisher Diogenes Verlag who has since become his main publisher.

1962
He holds his first major exhibition in Berlin where he meets Willy Brandt and Günther Grass. Tomi becomes busily engaged in the Civil Rights movement against segregation and the Vietnam War. He publishes numerous posters which are notable for their radical stance.

1966-67
(Self)Publication of The Party, a book in which Tomi expresses his aversion towards New York elite society as well as Fornicon. Tomi becomes the food editor for Playboy magazine. He rents a studio in Montreal where with Gordon Sheppard and Francois D’Allegret he created “The Wild Oats” a movie company.

1975
Tomi renews his links with Alsace by donating a substantial part of his work and his toy collection to the Musées de Strasbourg. He illustrates Das Grosse Liederbuch, a collection of popular German songs which sells well over a million copies.

1976
He moves permanently with his family to the Republic of Ireland.

1981
Retrospective exhibition at the Musée des Arts Decoratifs in Paris celebrates 25 years of Tomi Ungerer’s career. The exhibition moved to Munich where there were over 120,000 visitors, then to Düsseldorf, Hamburg, Dublin and the Royal Festival Hall in London where one third of the show was closed down having met with strong objections.

1990
He creates the Kultur Bank to promote Franco-German cultural exchanges. Tomi joins the interministerial board for Franco-German Relations, headed by the minister André Bord. He publishes Amnesty Animal and he is made honorary president of the European SPCA.

1991
Publication of À la Guerre Comme À La Guerre (Later published in English as Tomi, A Childhood Under the Nazis), a memoir of his experiences during World War 2 under the occupation of the Nazis.

1992-93
The American Biographical Institute lists him as one of “500 World Leaders of Influence”. He takes part in numerous humanitarian operations such as for the French Red Cross against AIDs and for Amnesty International.

1998
He is awarded the Hans Christian Andersen Prize, the most prestigious children’s literature prize.

2003
Tomi donates his private collection of over 3000 documents about fascism and its origins to the Bibliothèque Départementale du Bas Rhin.
Tomi is named Ambassador for Childhood and Education by the Council of Europe and he drafts the Declaration of Children’s Rights.

2007
Tomi donates his personal library of over 1500 volumes, which were incorporated into the Tomi Ungerer museum which opened this same year. The Tomi Ungerer Museum in Strasbourg is unique because it is the first time in French history that a government-funded museum has been established on behalf of a living artist.
A full-length animated movie of The Three Robbers comes out in Cinemas in France and Germany.

2014
Tomi is awarded one of the most distinguished honours in France, Commandeur de l’Ordre National du Mérite. This award was given in recognition of his continued lifelong struggle against prejudice using both artistic and political means.

2018
Tomi becomes Commandeur de la Légion d’Honneur.
He meets the Vallois beginning of Fall and they decide to collaborate.

His solo exhibitions include many acclaimed institutions such as the Musée d’Art Moderne et Contemporain in Strasbourg, the Wilhelm-Busch-Museum in Hanovre, the Itabashi Art Museum in Tokyo, the Stadtmuseum in Munich, the Max Ernst Museum in Brühl, the Kunsthalle Würth in Schwabisch Hall, the Drawing Center in New York, the Kunsthaus Zürich or the Folkwang Museum in Essen.

Tomi has published over 140 books which have been translated into 28 different languages, ranging from his acclaimed children’s stories to autobiographical accounts to controversial volumes of social satire and adult themes.