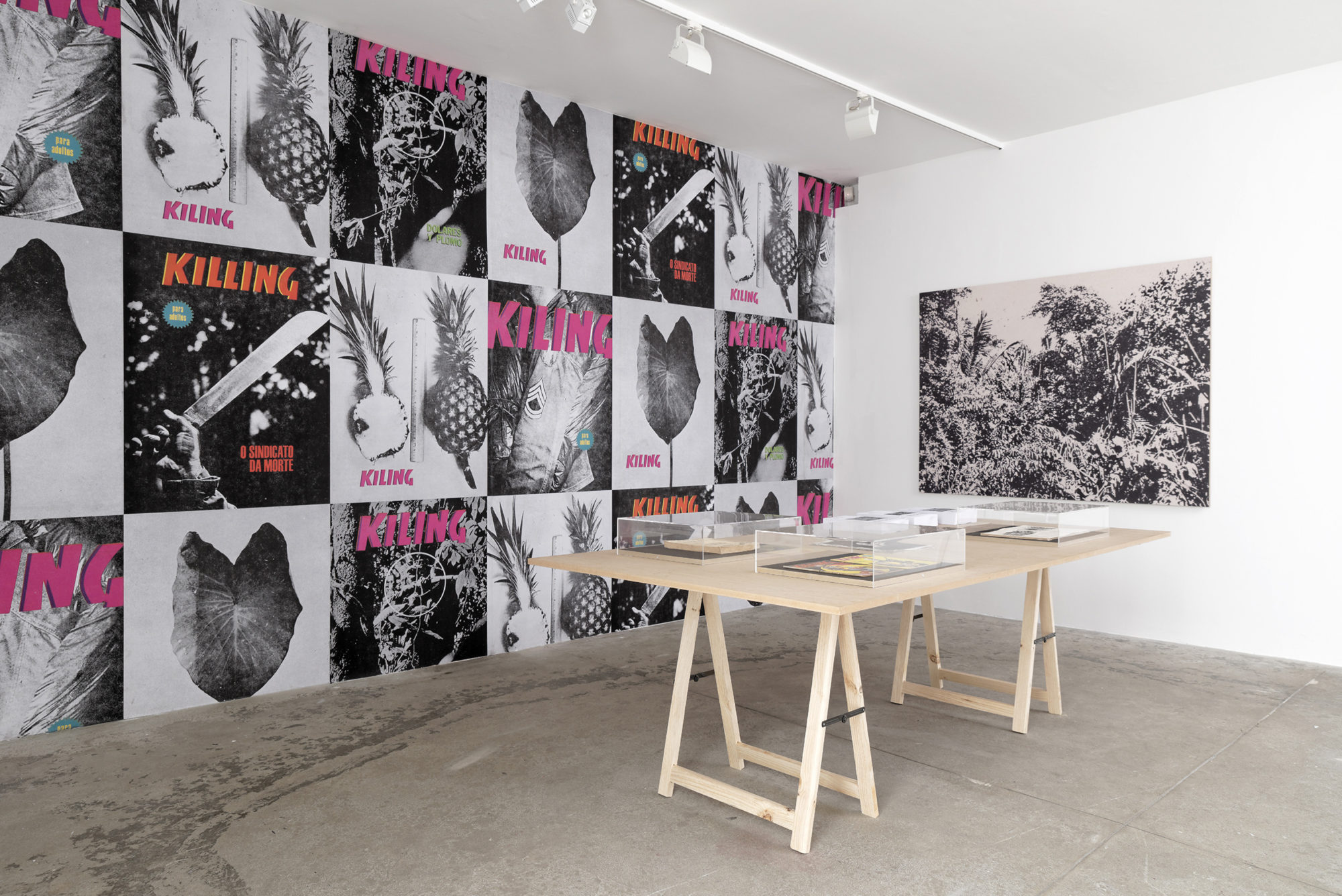 What’s the relation between the exhibition presented in our Project Room and the one which just ended in September at the Maison de l’Amérique Latine?

Operaciones y ceremonias, the title for both exhibitions, is a process which actually started at the end of 2010, when I found archive documents on flea markets in Paraguay. A first version of this project was presented in Asunción, at the Museo del Barro. At the Maison de l’Amérique Latine, and at the gallery, I worked on the same documents, the same sources, but with a different staging every time.
In this work in progress, the main identifiable elements are the military operation manuals published by the United States’ army and handed out to Latin-American soldiers within the sadly famous “School of Americas” (Escuela de las Americas). It all started right after the end of the Second World War, in 1946, and corresponds also with the beginning of the Cold War.
I found these manuals in a small flea market in Asunción, Paraguay, where I live and where I have been hunting for old objects every Sunday for 15 years. However, this story of the School of Americas is very “Latin-American”: it’s the story of the relation between each military dictatorship and the United States.
Paraguay was the first dictatorship openly supported by the United States. At the end of the 1950s, the other military dictatorships have had roughly the same operating modes: in Argentina, Uruguay, Chile, Brazil… We now know that the United States have supported almost all the right wing and far-right wing dictatorships in Latin America.

Does this choice of documents in your work correspond to a form of archaeology which you’ve been practising for a long time now, or has it a political connotation from the start?

The first time I became interested in the “political image” was more or less 12 years ago when I found in a flea market a hundred photographs showing the diplomatic life and system of the dictatorship since the 1950s all the way to the 1970s. I then made my first genuine political work which was entitled “The Return of the Sorcerers”. I was also interested at the time by other types of documents, not only photographs, but also political and military discourses. Behind the hyper-technical language, the dictatorship’s ideology lay hidden. When I found these military operations manuals in 2010, I was astounded by their title in Spanish and their origin: “Escuela de las Americas”.
I had already heard a lot about this “School of Americas”, but it is never mentioned in any history book! What these manuals showed were a typology of fruits and animals found in the tropical forest, different ways of constructing shelters… The images are very “technical”, they are true practical manuals on how to survive in the jungle.
Apparently, these manuals were genuine tools and not made for propaganda. When fascist governments practise propaganda, they use a real “propagandist graphic design”. Here, it looks more like an “anti-graphic design”! Therefore I wanted to provide them with a graphic design which corresponded to their true nature, to give images what they needed in a sense.

This is where the word “Killing” intervenes, this very graphic logo/title of a magazine verging on pornography, and which has seemingly nothing to do with the main topic here!

Killing is an Italian Magazine, but at the end of the 1960s, and even more in the 1970s, there was an explosion of erotic magazines in Latin America, from the richest, like Play Boy, to more popular ones. Among the trashiest of these was Killing, which became very famous over time, not just because of its pop aesthetics with its particular graphic design and images, but also because of its sadomasochist content. The main protagonist is an assassin disguised as a skeleton with a mask like the ones worn by Mexican wrestlers.
I wanted to construct a dialogue between this very popular cult of the death in Latin America (found in Mexico and all the way to Argentina) with very technical images of military operations.

You like to play with different levels of dialogue between texts and images, but also with their overlapping over time…

Killing and the images and photographs from these manuals are concomitant. I try to introduce another level of dialogue with the current events: here I present two landscapes from the manuals of Operaciones en la selva, partly covered with struggle writings by a guerrillero from Paraguay. The guerrilla still exists but its discourse seems completely anachronistic today, and they are almost always associated with drug cartels!
In Paraguay, there were no strong guerrilleros movements, like the ones in Colombia, Peru or Argentina in the 1960s-70s and 1980s. The dictatorship in Paraguay came before the Cuban revolution. The last dictator, Stroessner, stayed in power for 35 years, from 1954 to 1989, and he got rid of all forms of opposition.
Only long after the end of the dictatorship in 1989, did leftist movements start to appear, claiming to take up arms, using a Marxist discourse dating from the 1970s and completely anachronistic. In 2009, militaries found an operation manuscript of survival in the jungle, but written by leaders of the Paraguayan guerrillero-terrorist movement EPP (Ejército del Pueblo Paraguayo)! This manuscript found in 2009 was first published at the beginning of the 2000s although there is not much left of the jungle described in these manuals!

How could I not mention the terrorist attack against Charlie Hebdo which happened a day before the opening of your exhibition? What is the reaction of a person like you who lived half his life under a dictatorship?

What always attracted me about France was its defence of the freedom of expression. In my country, censorship was total: the press was entirely owned by the tyrannical power of the dictator; artists and intellectuals were hunted and had to flea or stay silent. If not, they were simply eliminated!
I was deeply shocked and affected by this attack against freedom of expression. In the exhibition, I talk about State terrorism, but also about the dialogues that exist today in Paraguay with terrorists/guerrilleros. I never questioned the fact of showing this series here in France, in a land where freedoms are ensured. Now I do. My perception of the exhibition and of its moment are irreparably modified by what just happened.
Will you face the same type of questions as the ones we faced during the dictatorship? I don’t think so and I certainly don’t hope so…