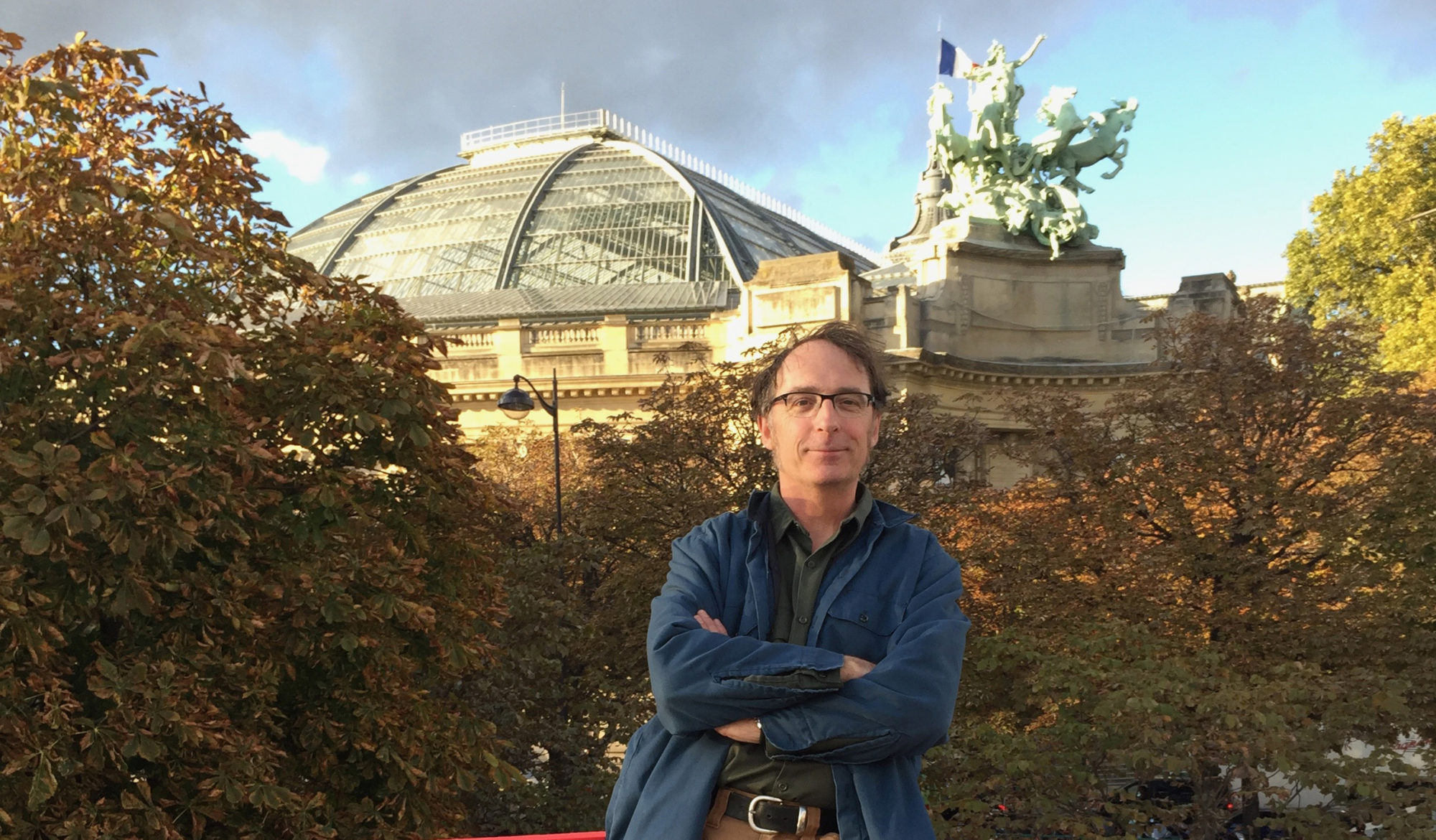 This exhibition talks a lot about painting, its techniques, its formats, its topics… In 1996, you had an exhibition named Tentatives (“Attempts”): a series of “real” paintings were shown at the gallery, but only for a night, the only testimony of it being a photograph. More than 20 years later, it seems that the painting is very present within the works you’re showing at the gallery, can you tell me more about your relation to painting?

I’m actually less interested in painting today than in the landscape! 15 years of painting, the Attempt,was essentially a landscape exhibition, although what I found intriguing at that time was mainly the idea of a lifetime of painting. This time I use landscape paintings to sketch a hypothesis: there might be a close relationship between representations of the landscape and the formation of nations. In backdrop (arrière-plan), the paintings are represented through the trompe l’oeil technique, sometimes with their frame. It is less about the painting as a technique or practice for the artist, than about the destiny of paintings, when preserved and exhibited in museums and collections.

In this exhibition, you quote and even openly copy artists, American landscape painters (Sheeler or Bierstadt), in particular Albert Marquet, and more generally you often refer to the work of urban planners, architects, engineers… Simple references, or a will to rehabilitate their work?

It’s true that these are often artists who did not benefit from a large enough reputation, or they lost it, but my intention has never been to rehabilitate them. I’m interested in their work as it appears today, in the way it stays active even if it is sometimes forgotten; in fact, these amnesias are often interesting in themselves. It is less about quotations or references, but more about cover versions or transformations. I have the feeling that I’m resuming their work where they left it, or where I’ve found it. Yes, I think this is it, all these works are like found objects for me, they are not always abandoned but they offer a sort of availability. They form a landscape, in a way, which we can transform, which we always transform actually, and which I like to prolong. But in this exhibition, it’s a little bit different. For instance with Marquet, it’s not his activity as a painter or artist which I prolong, but more the one of historians and curators, or even the one of connoisseurs of landscape paintings. I think about the way we consider these works today, the trompe l’oeil gives form to these different ways of seeing them, more than they update the paintings themselves. It’s for this reason that we find different registers of being present for these paintings in the gallery. Smooth and shiny, shown within its frame, it’s the preserved painting, the collected painting which is present in the exhibition, and the topic of the picture matters less in the end. Whereas with a wallpaper, drawn without its frame and directly glued on the wall, the topic becomes more important. The first is more a painting, whereas the other is first and foremost an industrial landscape under a grey sky. But we can also see the intensity of the memory which reminds us differently of past works when we visit an exhibition. These paintings all belong to the history of art, but they appear in the exhibition in different ways, they don’t have the same presence, and this is made possible by the very fact that they are not the original paintings and are redrawn.

You just published with Elie During an essay on the notion of future, or more precisely on the notion of “retro-future”. In this essay, you don’t just illustrate his writings but you develop your own work. It seems that “retrospectively”, you both had the same preoccupations about time, each within his own terrain…

Elie was the one who noticed this convergence in our own works. Originally, I asked him to write a text for an exhibition catalogue, not directly about my work, but more within his own preoccupations, and I offered to work on the iconography of the book afterwards, once the text was written. In the end, the publication goes beyond, and the rapport between text and images produces a strange feeling, like a two-voice canon song. We are interested in the same topics, but in different ways. Elie thinks in abstract terms, starting from the concepts, when my reflections work by analogy, starting with the objects. For instance, on the way something which happens seems to have always been possible before, Elie will think about Bergson with his “retrograde movement of the real”, whereas I will think about the evolution of the ailerons of prototype aerodynamic vehicles.

It’s astounding how we sometimes find in recent architectural works or in publications some of your projects, such as “Plug-in City 2000”. I’m thinking about the Quai Branly Museum or this ensemble of buildings in South Africa which seem to have been modelled on your photographs…

It’s truly unsettling, this building in Johannesburg seems to be a transposition, within the real, of one of my drawings from the beginning of the 2000s. It’s not the first time that it happens, especially with Plug-in City (2000), even though it is the first building like that; it happened before with images or films. This work has circulated quite quickly, the images were joyful and optimistic and were often reproduced in trend magazines for instance. I don’t think they were actually copied, rather they participated in popularising the idea of this kind of construction. With time, they’ve become a possibility among others. And even if the inspiration had been more straightforward, in a way it would be as if the authors of the project would have prolonged my work where I left it, and I would be wrong to be offended by it, on the contrary I rejoice in it! What a happy fate for a painting to become a landscape.